The Washington Kastles are world renowned for their doubles might. From Martina Hingis and Leander Paes to Bob and Mike Bryan, the team’s greatest doubles stars have thrilled countless sports fans time and again at Kastles Stadium and on the biggest Grand Slam stages in the world. Yesterday, the Kastles’ newest doubles dream team continued the tradition at the All England Club in one of the most sensational matches of the 2019 Wimbledon Championships.

In front of a packed crowd on Court No. 2, defending mixed doubles champion Nicole Melichar and five-time Grand Slam champion Bruno Soares gave 16-time-combined Wimbledon champions Serena Williams and Andy Murray a lesson in doubles. The Kastles stars downed the tennis legends, 6-3, 4-6, 6-2, in a blockbuster showdown to advance to the quarterfinals of this year’s Mixed Doubles Championship.

The win ended a fan favorite story line at the All England Club that attracted global interest. Williams and Murray were outspoken about their ambition to win the prestigious Wimbledon title in their mixed doubles debut as team. The pair won their first two matches of the tournament without losing a set, including an impressive win over Philadelphia Freedoms stars and #14 seeds Raquel Atawo and Fabrice Martin, 7-5, 6-3, but were in over their heads against Melichar and Soares.

Melichar won the title last year with Austrian doubles specialist Alexander Peya to claim her first Grand Slam title and Soares is a three-time mixed doubles champion and former Wimbledon mixed doubles finalist. They also had the advantage of competing in two majors together heading into the match. They reached the semis at both the Australian Open and French Open earlier this year.

The Kastles duo set the tone early. After denying the first break point opportunity in the first set, the pair forced two break points on the Williams serve, taking the second when Soares fired a cross-court return winner.

The second set was more competitive. Murray held serve twice at love, but Soares and Melichar steadily held in kind, until 4-5, when Soares, serving to stay in the set, inexplicably double-faulted three times to hand Murray and Williams the set and even the match. But the Kastles quickly regrouped.

They immediately broke Murray in the first game of the deciding set. Soares sealed the game with a winner past Williams for extra emphasis. The top seeds then raced off to a 4-0 lead, all but ensuring the victory over the Wimbledon greats. Williams and Murray managed to score two games in the final set, before the Kastles stars consolidated the win on Melichar’s serve when Murray dumped his return into the net.

“They played well,” said Murray in his post-match press conference. “I think they played quite a bit together. They were solid. I think we were probably a little bit more up and down than them throughout. They were more consistent…They deserved to win.” 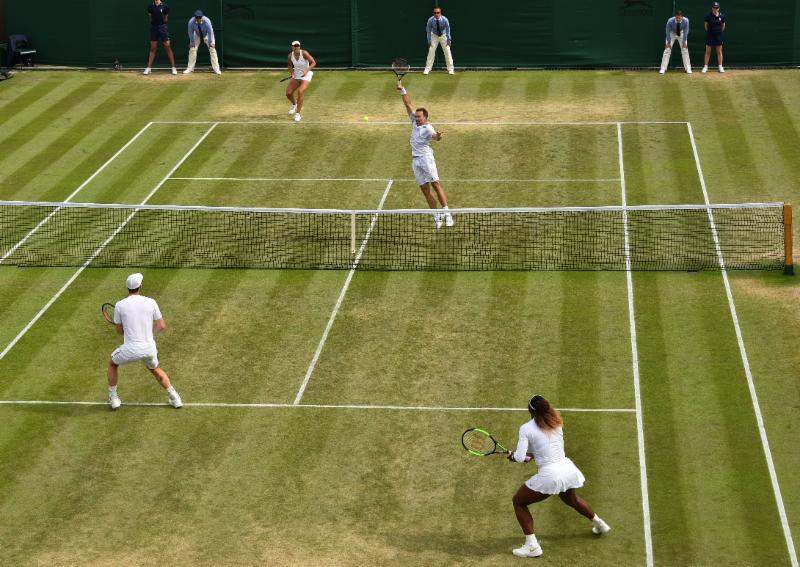 Prior to their third round encounter against Williams and Murray, Soares and Melichar defeated Ukranian-Kazakhstani duo Denys Molchanov and Galina Voskoboeva, 7-6(4), 3-6, 6-3, and received a bye in the first round.

Up next, the #1 seeds play Dutch doubles specialist Matwe Middelkoop and Zhaoxuan Yang of China in the quarterfinals today, second up on Court No. 1, around 8 a.m. EST. The unseeded duo upset #9 seeds Hao-ching Chan and New York Empire star Neal Skupski in the second round.